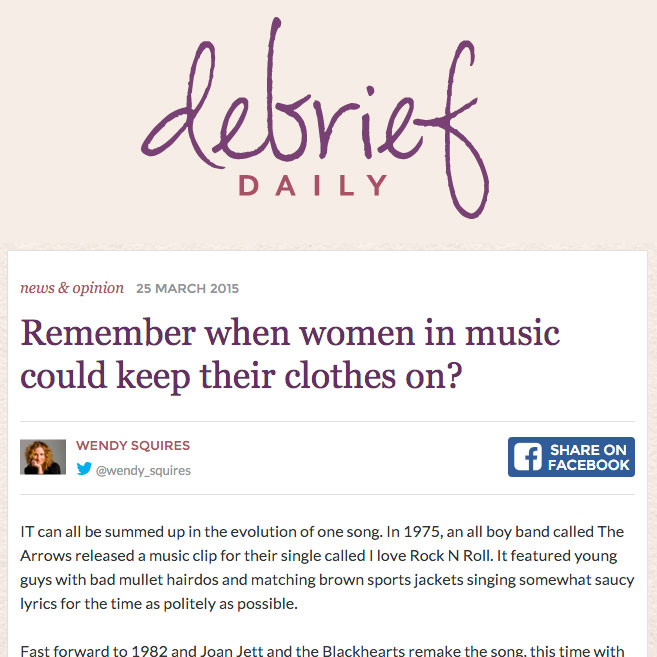 Today, women in music are selling their souls.

Thanks to Wendy Squires for seeking my thoughts and including in her opinion piece on Women in Music Videos:

“Leanne Kingwell agrees that the focus on the music video has taken the spotlight off the music, and women are the big losers in the shift. A talented singer/songwriter/performer, she’s feeling the pressure to conform to promote her latest album, the brilliant ‘Choking on Halos’ (check it out at leannekingwell.com), but is fighting it with all her might.

So, what to do if you are a talented female artist who would prefer to have her music noticed without adding bouncing bums and breasts? In Leanne’s case, she self-produced her album as a means to sidestep the industry pressure and bull she encountered with albums past. And, as a woman, not a girl, she knows how easily her music could be overlooked should she not fit the nubile bustier and stockings stereotypes dominating Saturday morning music shows.”

“Too many mainstream clips help reinforce a subliminal perception that only young sexy women are welcome in the music biz,” she rightfully complains. “There are stubborn indies who persevere through this. But we’ll never know how many women stopped trying to make music because the couldn’t ignore the subconscious message screaming that they should stop because they were old to crack it now.”

“Engineers, scientists, lawyers and CEOs are allowed to grow older wiser, more experienced and respected,” Leanne Kingwell points out. “Music videos that pull focus on and exploit youth and sex do the opposite, especially for women. Age only improves my ability to write, record and sing better songs. But I’m constantly battling my own subconscious hang-ups on whether or not an audience will find me acceptable.

“If I was a novel writer it would be like the book cover being more important than the pages between. And on top of that also having to spend considerable energy and acquire the skills to conceive and illustrate a front cover. But all a novel writer really should have to do is write an amazing novel.”

If only it was that simple. After all, music is made for the ears, not the eyes. But as long as the music clip lives, I fear the song will remain the same and sex will sell singles and taut tail will tag along with talent. At least for women, that is.”